“Museums taking an activist stance is not new”

On July 26, the Brooklyn Museum opened The Legacy of Lynching: Confronting Racial Terror in America. This exhibition, created in partnership with the Equal Justice Initiative (EJI) and Google, “seeks to spark an honest conversation about the legacy of racial injustice in America today.” EJI is a nonprofit in Montgomery, Alabama, that works to address racial and social injustices and to end mass incarceration. The exhibition includes artists such as Kara Walker, Rashid Johnson, and Theaster Gates. This is one of many recent examples of museums that have taken an “art for social change” stance in their programming.

Museums taking an activist stance is not new—in fact, they have been doing so for many years. Sometimes museums take a stance in a subtle way, such as when natural history museums included The Couple in a Cage: Two Amerindians Visit the West in 1992-93. In this work, artists Coco Fusco and Guillermo Gómez-Peña embodied fictional characters or “Amerindians” to make visible the abuse and exploitation inflicted on indigenous American Indians by European invaders. While these museums did not make an overt political statement on their intentions of criticizing the United States’ origin story, it was also a very important moment for including works of art that did not fit into the status quo. In more recent history, museums have become increasingly vocal in their ability to make political statements—for example, the Museum of Modern Art reacting to President Trump’s travel ban of early 2017.

This raises the questions: Should museums be seen as a place of dialogue for social change? Is it their responsibility to do so?

Recently, articles have come out addressing this topic—for example, MuseumNext conducted a survey asking “Should museums be activists?” Among the responses, data showed that “younger audiences respond very positively to the idea of museums taking a stand.”

In many instances, even if a museum is unable to take a political or social stand for whatever reason, museum educational programming can still address the needs of the community. Last year at the High Museum, we began partnering with the Georgia Department of Juvenile Justice on providing guided tours for imprisoned students from various detention centers in the state. At the end of the year, we had an exhibition of the students’ work and a reception with the students, their parole officers, the students’ family, caregivers, and friends. We hope to grow the program to be more substantial and far-reaching, for more students, in the upcoming school year. 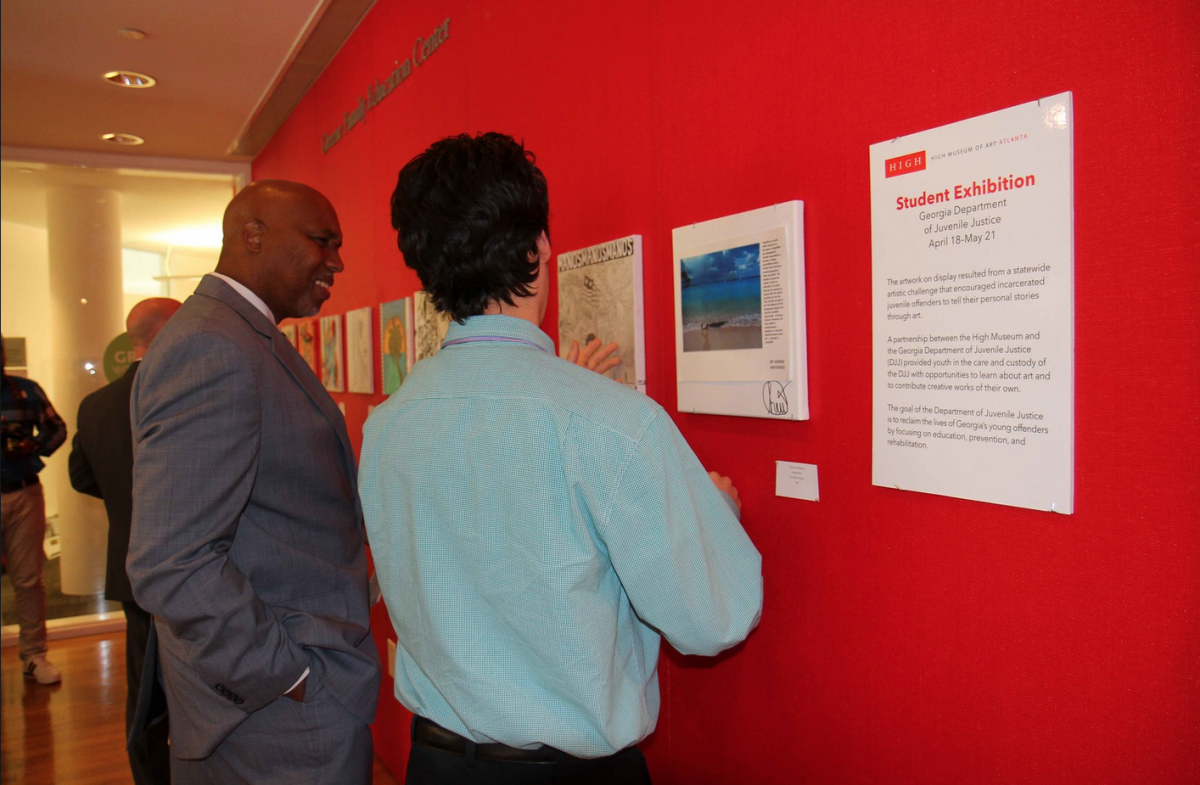 Georgia Department of Juvenile Justice exhibition at the High Museum of Art.

Minneapolis Museum of Art took on the question “How can the museum be used as a site for social action?” and created a three-year strategic plan called Museum as Site for Social Action (MASS Action). The three years end in October, when they will unveil a toolkit of resources for museums and social action including educational programming practices.

Evaluation, documentation, and public response will determine the efficacy and sustainability of these programs. The responsibility of museums and cultural institutions to provide for a community, especially the next generation, is important, albeit complicated.

The choice of museums to take a stand is unique to each institution, and it’s complicated, layered, and specific to the geographical location and political climate of the region. In the meantime, artists will continue to create works that question our existence and boundaries; be responsive to the emotional, social, political, and religious world around them; and ask the important questions that move us all forward as aware global citizens. Museums and cultural institutions that support contemporary artists will continue to support them, whether through curatorial or educational programming. Supporting artists will also mean empowering youth voices through museum settings and allowing young artists to continue to push boundaries, respond to the world around them in an empathetic and critical way, and ask important questions for the rest of us to listen.

Kate McLeod is a member of Americans for the Arts.